Welcome to our research project site, where we will provide regular field updates, introduce you to our pinnipeds of the Penobscot River, and share with you our research findings.

Harbor seals are the smallest and most common of the seals we observe from the coast in Maine.  Today, their population throughout the Northeast US numbers approximately 75,000 (Hayes et al. 2019).  Harbor seals can be seen year-round in coastal waters or hauled out on the many rocky outcroppings, islands, and beaches of Maine’s coastline.  Females give birth to their pups in May and June and wean their pups within 4-6 weeks.  As adults, harbor seals can reach 4-5 feet in length and 200-250 pounds in weight.  To tell them apart from gray seals, look for the distinct dog-like resemblance of their face.

Gray seals have become an increasingly common sighting from the coast in Maine, as their populations have recovered from historical exploitation over just the past two decades.  Today, there are an estimated 27,000 gray seals in US waters, and an additional 400,000 gray seals in neighboring Canadian waters (Hayes et al. 2019).  Gray seal females in our region give birth to their pups between December and February and wean their pups within 2-3 weeks.  As adults, male gray seals can reach 7-8 feet in length and over 700 pounds in weight.  Compared to the cocker spaniel face of a harbor seal, gray seal faces have been compared to the shape of horse heads.

Our Study Site: The Penobscot River

The Penobscot River, the second-largest river system in New England, runs from the Maine/Quebec border, past our campus, and into the Penobscot Bay Estuary. The river provides a thoroughfare for anadromous fish between lake and oceanic environments.  Marine mammals, including harbor porpoise, harbor seals, and gray seals, are also commonly observed in the river, which is tidal and brackish nearly all the way to our academic home.

Following a history of anthropogenic impact from damming, fishing, and logging, the Penobscot River has been the focus of almost two decades of collaborative conservation and recovery efforts (e.g., the Penobscot River Restoration Project), involving several non-profit conservation groups, the hydropower industry, state and federal agencies, and local communities including the Penobscot Indian Nation.  Today, the river is potential spawning ground for endangered shortnose sturgeon and home to the largest endangered Atlantic salmon run in the US.

Updates from the Field

All research activities are conducted and photos are taken in accordance with the Letter of Authorization issued to the NMFS Northeast Fisheries Science Center (Document #2016-22582) and NOAA NEFSC Permit #21719-01.

What began as a cold, fo 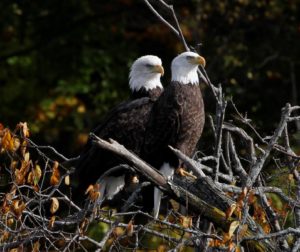 ggy day turned into a beautiful afternoon on the river, complete with colorful foliage and glassy seas.  Luckily for us, the fog lifted right before we arrived at Odom’s Ledge.  Nine gray seals and 18 harbor seals were spotted at the ledge.  Fort Point was a bit quieter than normal.  There was only one harbor seal and one gray seal hauled out at this ledge, with a few more animals swimming in the area.

We had several exciting bird sightings during this week’s survey as well!  Lots of white-winged and surf scoters have moved into the lower part of the estuary, and we’re still seeing several flocks of mallards further upriver.  We saw our first black guillemot of the season down at Fort Point, and we spotted our first buteo hawk of the season as well.  We also got some great looks at a pair of bald eagles in Hampden…check out the photos below!

As the seasons change, our season is slowly coming to a close.  We have one survey left this year, scheduled to take place at the end of October.  Stay tuned! 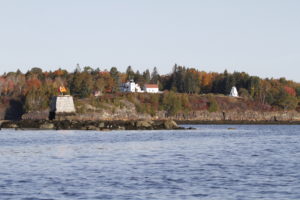 It was another cold day out on the river this week…things are changing fast!

In addition to our vessel surveys, I am also conducting land-based surveys of Buck’s Ledge.  Over the past couple months, there have been a handful of “regulars” that hang out at this ledge.  In addition to the number that gets assigned to seals in the identification catalog, I have given these ones nicknames to help me recognize and identify them in the field.  During our boat survey today, we had three harbor seals on Buck’s Ledge: Fido, Batman, and Horseshoe.  See photos of these three below…I’ve circled the patterns in their pelage that inspired their nicknames. 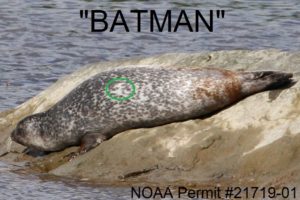 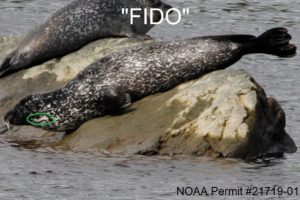 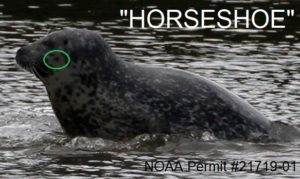 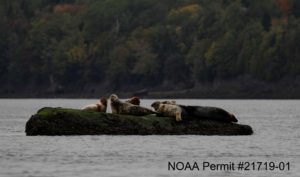 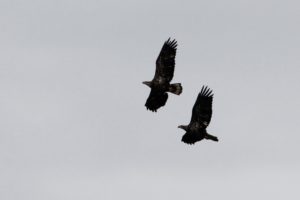 We had some interesting eagle sightings too!  On our transit south, we saw an eagle onshore eating a large fish!

Towards the end of the survey, we saw two juvenile eagles flying and twirling around together in the air.  They eventually joined up with two adult eagles, and all four were riding the thermals like turkey vultures…very cool! 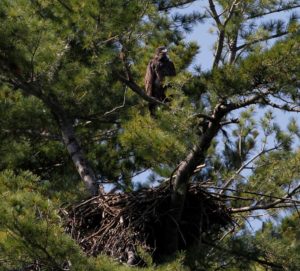 It certainly felt like fall on the river last week!  Thanks to a cold wind from the north, we were bundled up in hats and winter jackets.  Despite the cold, it was a beautiful day out on the river.  Most of our osprey nests were empty this week, but we still had a juvenile bald eagle hanging out near its nest.

There were still lots of seals hanging around on both Odom’s Ledge and Fort Point Ledge.  At Fort Point, there were five gray seals hauled out together on the rocks near the southern portion of the ledge, and a harbor seal was hauled out further up the west side.  All six animals were new additions to our photo-identification catalogs.

On Odom’s Ledge, we saw three gray seals and eight harbor seals on the southern side of the ledge.  We were able to get good quality photographs of four of them, including one harbor seal that was a re-sight from August 5!  This was our first successful harbor seal re-sighting at Odom’s Ledge this season!

We have also been collaborating with partners in the Cammen Lab on an environmental DNA (eDNA) project.  Since animals leave DNA in their environment (e.g., skin cells slough off in the water as an animal swims), we have been trying to extract seal DNA from water around the haul-outs in hopes of developing less invasive ways of studying these animals.  All summer, we have been collecting water samples at various locations and distances from the haul-out sites.  Once back in the lab, our lab technicians filter the water samples.  DNA is extracted, amplified, and sent out for sequencing to confirm the species.  This process requires a lot of trial and error, as these methods have never been applied to seals before!  In August, we successfully detected harbor seal DNA in our samples.  This week, we focused on trying to obtain samples of gray seal DNA.  We collected samples from both Fort Point and Odom’s Ledge, and are looking forward to seeing the results once these samples have been processed! 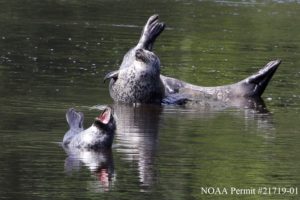 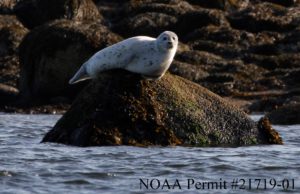 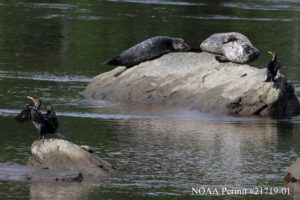 We conducted our first fall survey of the season yesterday!  Things are changing fast out on the river…the weather was chilly, some leaves were just starting to change, and our big cormorant rookery has mostly cleared out.  We have three eagle nests along our survey route, and all of the eagle chicks are now out of the nest and flying around nearby.

We unfortunately did not have much luck with the seals this survey.  It was very rough on the water during our transit south, making it very difficult to take any photos, and making it dangerous to approach the haul-outs too closely.  We didn’t know if we were going to make it to the southern end of our survey route, but we pushed on, and luckily, the sea state calmed down once we reached Fort Point.  There was only one harbor seal hauled out down there, so we were able to photograph that animal, as well as a swimming gray seal, who was matched to a seal spotted on Odom’s Ledge back in July.  Many of the seals we typically see at Fort Point haul out on the rocks in the southern portion of the ledge; with such a strong southerly wind and waves hitting those rocks, it’s not surprising that the seals were elsewhere.

Hopefully our next survey will bring nicer weather and more seals! 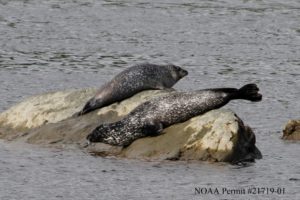 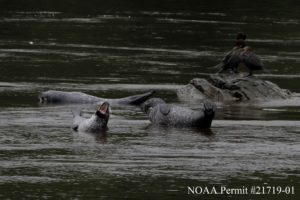 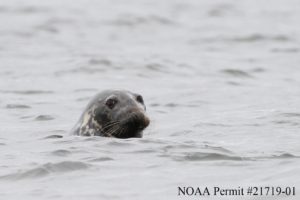 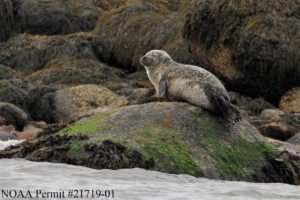 Our field season on the Penobscot River began on May 1, 2019, and we have recently completed our ninth and final survey of the summer.  Even though the summer seems to be winding down, our survey season is still in full swing; we have five fall surveys scheduled and are aiming to be out on the water until November 1.

We have had a great season so far.  This survey has been regularly conducted by the Northeast Fisheries Science Center since 2012, but this has been the first season that has included seal-focused research.  In addition to documenting seal sightings throughout the survey and on the three major haul-out sites along our survey route, we have been photographing seal haul-out sites in order to obtain more accurate counts, to better document species present, and to record any entanglements, wounds, and shark interactions.  We have also focused our efforts on obtaining high quality images of individuals in hopes of being able to individually identify and track animals over time.  So far, we have re-sighted two harbor seals and one gray seal.

Possibly as a result of our more dedicated seal survey efforts, we documented harbor seal pups in the estuary for the first time since the survey began.  Pups were documented historically by aerial survey teams; the most recent data we have is from 2001, so it was exciting to confirm that the harbor seals are still pupping on these ledges.

Another interesting difference between this season and previous ones involves the presence of gray seals.  We have seen an influx of gray seals into the estuary since the beginning of July.  Between 2012 and 2018, only three gray seals were observed out on the rocks.  This season, Fort Point Ledge has become dominated by gray seals; we had one week where 20 of these animals were hauled out on the rocks, with even more swimming in the water around the ledges.  Odom’s Ledge has also seen an increase in gray seal presence: on our last survey, almost half of the animals present were grays.

The river seems to be constantly changing, and we’re excited to see what the rest of our season brings.  Stay tuned for more updates this fall!

This project was funded in part by the Maine Outdoor Heritage Fund, in which proceeds from the sale of a dedicated instant lottery ticket are used to support outdoor recreation and natural resource conservation.For more information about MOHF, go to www.maine.gov/ifw/mohf.